Located in Hai Chau District, Da Nang, nearby the harmony Han river, Cham Museum Da Nang was first proposed in 1902 by Henri Parmentier, a French archaeology, and reportedly founded in 1915. However, until 1991, its first building was opened. This building was decorated with some traditional Cham in the composition, altogether with the French Colonial architecture, turned it into a perfect location to be the exhibition site of many precious Champa artifacts.

After expanded twice in the mid-1930s and 2002, the Museum of Cham Sculpture nowadays not only space for presenting but also works as a venue for storage, a library, a restoration workshop. Cham museum Da Nang is directly affiliated with the city Department of Culture, Sport, and Tourism.

Cham Museum are displaying more than 400 historical pieces includes altars, lingas, garudas, apsaras and images of Hinduism Gods and Goddesses like Shiva, Brahma and Vishnu… this place is truly a treasure since it’s the world’s largest collection of Champa cultural artifacts, which is dating from 5th to 15th centuries. These relics were collected from many places and you will find ten rooms called by the name of these locations where they were discovered such as Dong Duong, Khuong My, My Son, Tra Kieu and many other archeologist sizes in Vietnam. 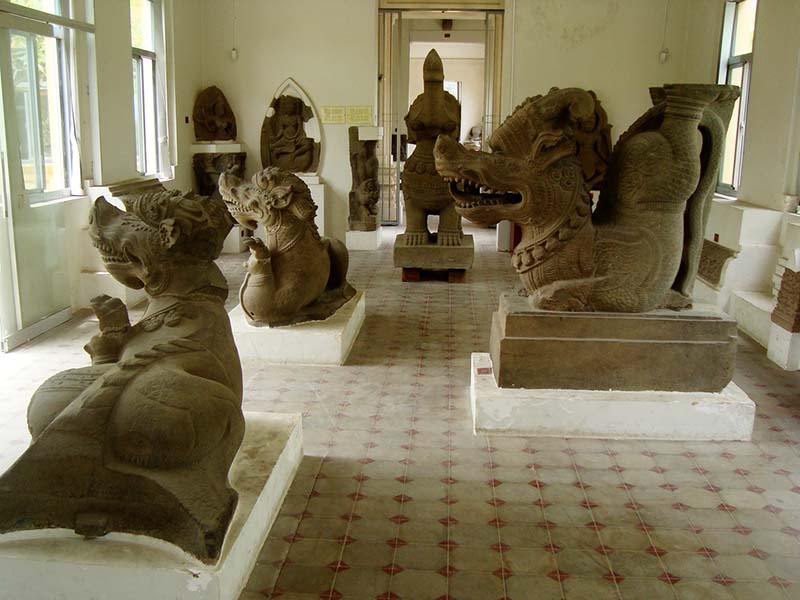 Cham museum Da Nang is also well documented in three languages Vietnamese, English, French. Any visitor comes here will find this place is charming and mesmerizing while making their steps go from rooms to rooms, listen and observe the remained heirlooms tell their story of a long-forgotten glorious kingdom.

Cham museum Da Nang is open daily from 7am to 5:30pm.
Admission is VND 40,000 (~USD2). Budget an hour to 1.5 hours for a leisurely visit.
Guided tours for groups of 5 or more are available in English and Vietnamese from 8-10am and 2-4:30 pm. If you ever had a chance to come to the beautiful land of Da Nang, a day trip Da Nang city would be nice to make your trip become a great cultural adventure