Son Tra is a beautiful peninsula in Da Nang with long, white sandy beaches, picturesque landscapes and primeval forests – a must-see for any traveler to Da Nang. Son Tra peninsula also known as the Monkey Mountain, stretches from Hon Chao to south of Hai Van Pass. Son Tra peninsula is home to 191 coral species as well as three species of sea-grass, 72 species of seaweed, 53 species of mollusks, 23 kinds of echinodermata (starfish, urchins, etc) and 221 plankton species. 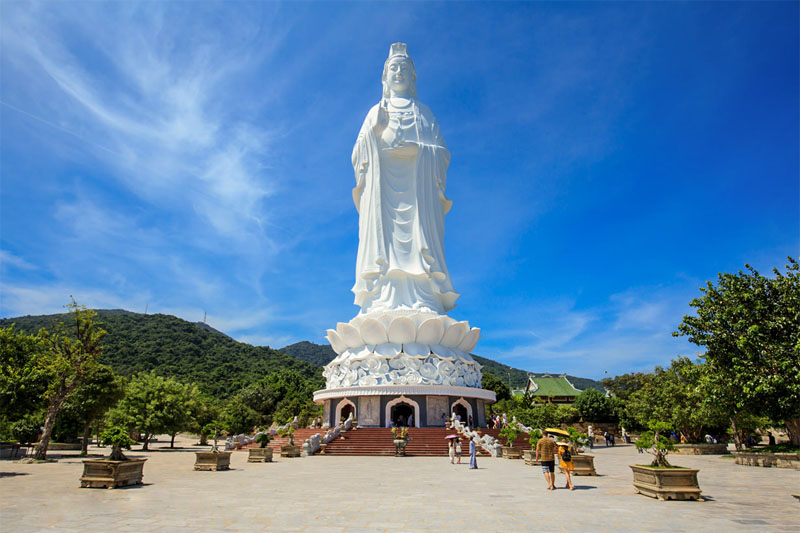 Things to see in Son Tra

Son Tra Quan Am (Son Tra Goddess of Mercy) is the in-official symbol of Danang city, similar to the Jesus Christ in Rio de Janeiro, Brazil. Unveiled from July 2010 at Linh Ung – Bai But Pagoda, Quan Am statue and Linh Ung pagoda is is now known as one of the most significant pilgrimage destinations for Buddhists in Vietnam.

The Quan Am statue is 69.7 meters height and positioned on a lotus shaped platform which is 35 meters in diameter. There are 17 stories built inside the statue. Each storey has 21 Buddha idols. It toke 6 years to build the statue, the Son Tra Quan Am holds the city peace and spiritual life.

10kms from downtown, on mountain-side of major road up to the peak, Dong Dinh named by the native plant, Caryota mitis lour, Burmese fishtail palm. This is the first private museum in Danang, found by Mr. Doan Huy Giao. Artifacts are dated back to 100-2,500 years ago. Belonging to ancient cultures like Dai Viet, Sa Huynh, and Cham Pa, they were collected from central and highlands hill tribes.

An amazing and unique giant banyan tree with dozens of roots spanning down to ground, Hon Nghe point,  North–east of the peninsula. No ones know exactly how old the tree is. For locals, the tree may reach up to 1,000  years old. 20m height, 9 root-clusters.

17 kms from the city center, winding & hilly roads, the tree is a favorite place for tree lovers and alike ones, esp during the hot summer days. On clear days, there is a good view forwarding Danang, Son Tra main path and Cham Island.

At the height of 580m above the sea level, Son Tra View Tower offer panorama view forwarding to Danang, Son Tra Beach and lush green surrounding forest. Place for nature eco and birds songs. Nearby, the army radar station dated back from 1960s, considered as “ Indochina Miraculous Eyes”.  From the head-quarter, one can view and control a far distance ocean.

Explore the forest path for monkeys

Son Tra peninsula was named  Monkey Mountain by US troops, as there were many monkeys at the early time in the mountain, during the US war in Danang. Very few green trails offer an opportunities for monkeys watching. At present, Son Tra Nature Reserve on Son Tra Peninsula abounds with an eco-system of coastal tropical forests protected under the national regulations for forbidden forests. About 60% of the forest land on the peninsula are primeval jungles, including endemic species of peninsula forests in Indochina. 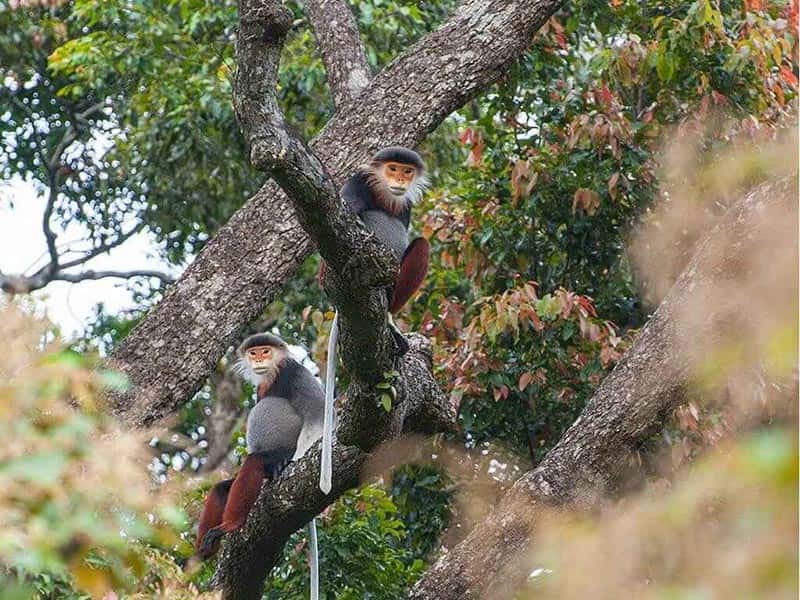 Another unique feature of the Son Tra Nature Reserve is the existence of about 12 herds of brown-legged (or five-coloured) languors. This is an extremely rare species with only 200 individuals living in Vietnam and in Son Tra forests. In addition, there are other rare species such as the yellow monkey, red-faced monkey, muntjac, wild boar and musk-deer; 106 species of birds including the silver pheasant, 23 species of reptiles and countless species of insects.

Swimming and diving in Son Tra

Indulge yourself into the local pristine beaches and diving in Son Tra peninsula.